Grinding is a chip-forming process which requires high energy to remove material to specified dimensions. The high energy, in return, generates heat which is created by the interactions of the grinding wheel with the workpiece. 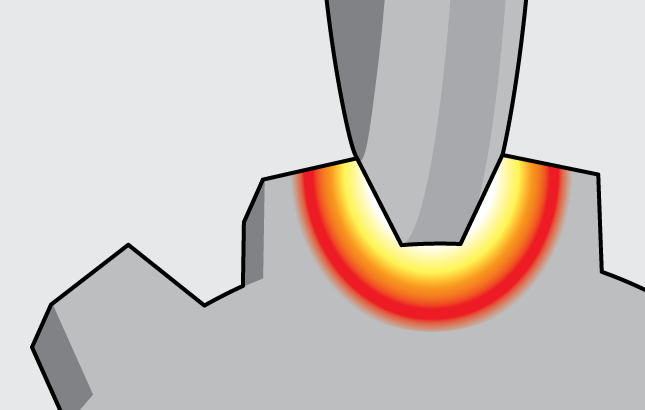 The generated heat energy is absorbed by the workpiece which increases the temperature of the workpiece from the surface layer into the subsurface zones.

Interactions of the grinding wheel with the workpiece

A grinding wheel has three main interactions with the workpiece which are cutting, plowing and rubbing. Cutting, particularly, causes the material removal by creating the chips. On the other hand, plowing pushes the material without removing any material from the workpiece which causes heat generation and cold work hardening. Rubbing, in turn, generates heat by sliding the abrasive particles of the wheel on the workpiece’s surface. During grinding, all three interactions can be seen in various degrees. The degrees of these interactions are mainly dependent on the grinding wheel’s condition. As an example, when a sharp grinding wheel is used, cutting will be more effective than plowing and rubbing.

What happens when the temperature of the workpiece increases?

Shortly; microstructural changes, elastic-plastic deformation as rubbing, plowing and chip formation and even fracture may occur. Some changes in the surface integrity most likely is observed as well.

When the temperature of the workpiece reaches above the austenization range, the surface will re-harden and high compressive residual stresses will form on the surface. This thermally hardened material is called untempered martensite (UTM) and known as re-hardening burn. With microscopic analysis, UTM is indicated by a white layer on the surface.

These re-hardened areas are normally surrounded by tempered areas causing a heterogeneity problem on the component. This will result in surface cracks and pitting when the component is taken into service.

One viable way to avoid the crack formation would be shot peening the component which will induce compressive residual stresses on the surface hence crack propagation will retard or stop.

When the temperature of the workpiece reach above the tempering range but below the austenization range, the hardness decreases and tensile residual stresses will occur under the surface. This thermally softened material is called over-tempered martensite (OTM) and known as re-tempering burn. With microscopic analysis, OTM is indicated by a dark layer under the surface.

If a fast, easy, and non-destructive detection is needed, both re-hardening and re-tempering burns can be detected by Barkhausen Noise Analysis.

How to reduce the temperature?

What affects the residual stress formation during grinding?

The residual stress formation during grinding process is due to plastic deformations and phase transformations which are affected by grinding parameters such as speed and feed rate. As an example, it is known that the differences in rotational speed of the grinding wheel produce different residual stress profiles. With high rotational speeds, there is an increase in the amount of tensile residual stresses. This may be because of the amount of heat which is created due to higher friction rates as well as other mechanical factors such as the load being applied on the component’s surface. It may be also explained by an increase in the depth of the cut.

The type of grinding wheel, its wearing rate, its depth of cut and the dressing condition also affect the residual stress formation.

One of the major causes of overheating of the component causing residual tensile stress formation is related to grinding wheel wear.

The coolant parameters such as concentration, age, flow rate and especially the type of the grinding fluid play an important role on heat transfer hence they heavily affect the formation of residual stresses during grinding.

It is very important to have an effective cooling during grinding since there is a constant heat generation. Any prior processing of material such as heat treatment will have a tremendous effect on residual stress formation as well.

To sum up, it can be said that grinding residual stresses are the result of complex thermo-mechanical interactions between the grinding wheel and the workpiece. It is a tribology phenomenon.

Have questions about residual stress measurement?